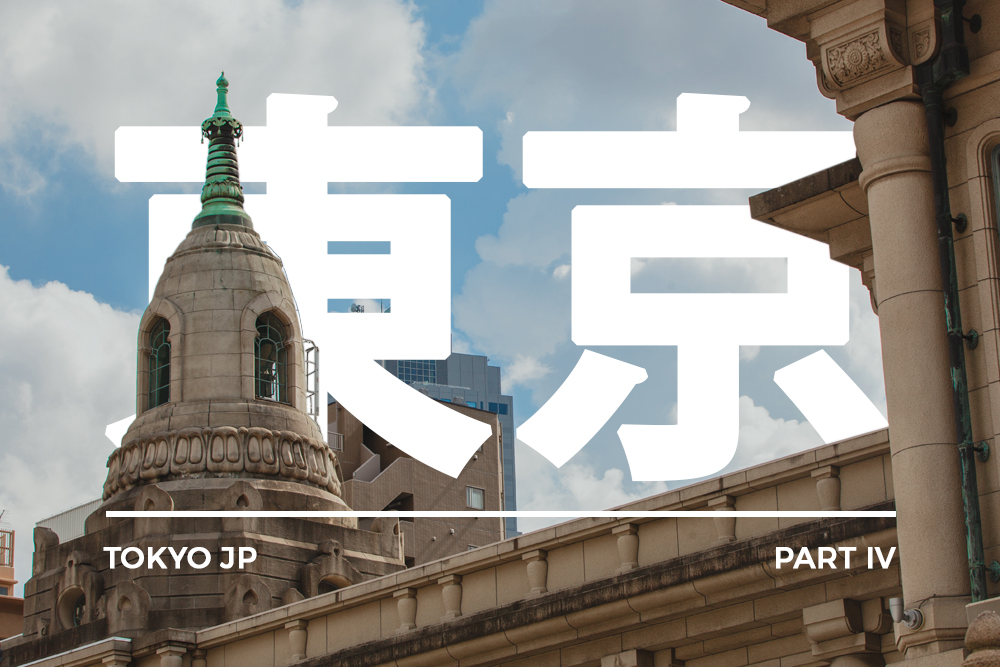 I was waiting for this day because I planned to order and try the fugu dish. You don’t know what is it? Fugu it’s a Japanese dish prepared from a pufferfish. This fish contains lethal amounts of the poison tetrodotoxin in its inner organs and if you don’t know how to cook it, 100% that you’ll die. Sounds not good, yeah? So, we came to the fish market and spent an hour but we found the right place with the fugu menu. I ordered a set of 10 small dishes- sashimi fugu, fried fugu, etc. and paid $60. As you understand, everything OK and I’m still alive, but I must admit that the fugue is a completely tasteless fish. For me, it was an experience and now I can say “I ate fugu and you’re a pussy!” LOL. I’m a huge fish and seafood fan so while we were on the market, I tried fresh tuna, fried octopus with a sweet soy sauce and sea urchin caviar.

The statue of Junnyo Shonin- the 12th Tsukiji Hongan-ji’s monshu (“Keeper of the gate”, the head of a monastery). 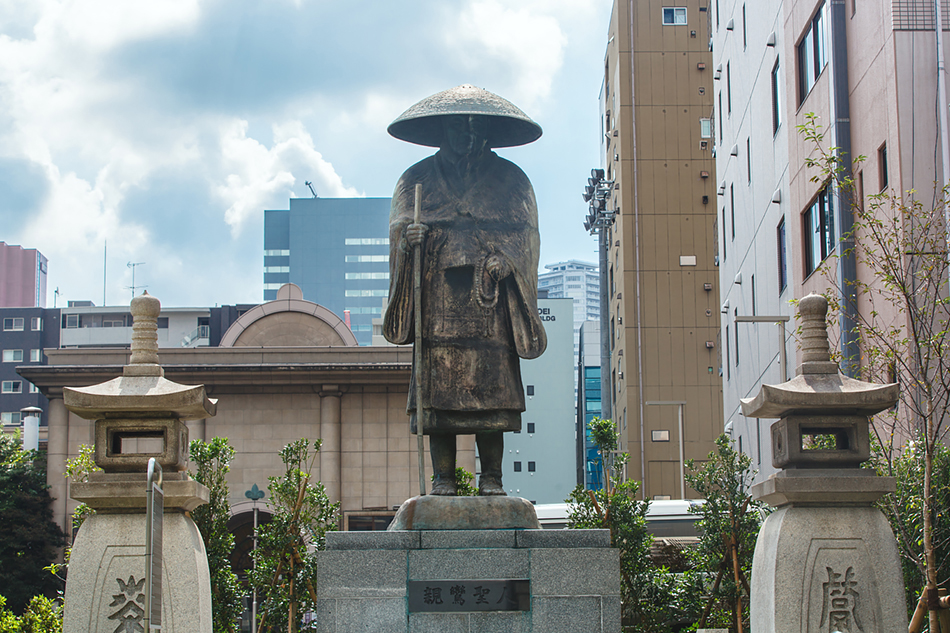 Tsukiji Hongan-ji is a Jodo Shinshu Buddhist temple located in the Tsukiji district of Tokyo. Jodo Shinshu is a school of Shin Buddhism, also known as Pure Land Buddhism. 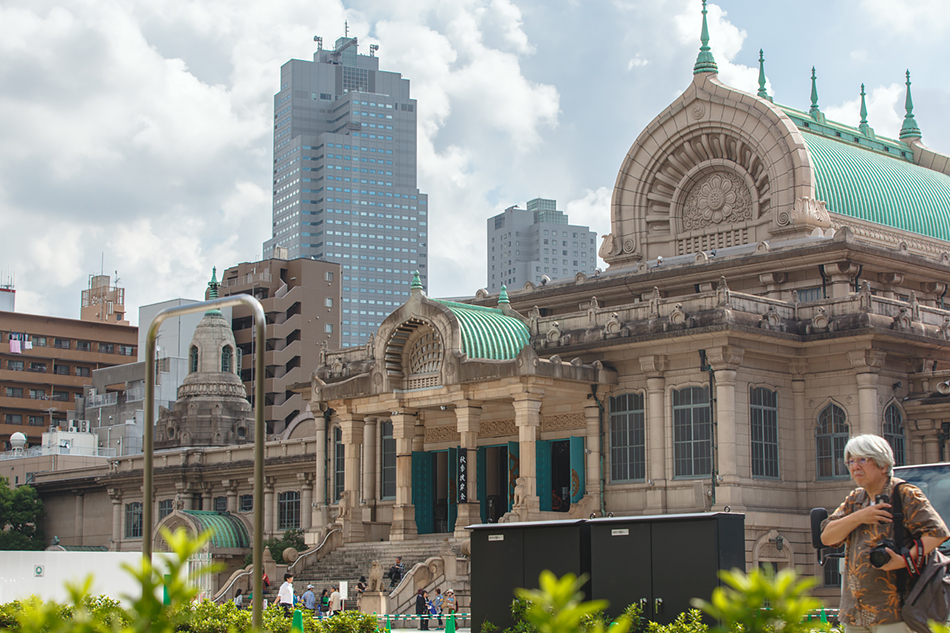 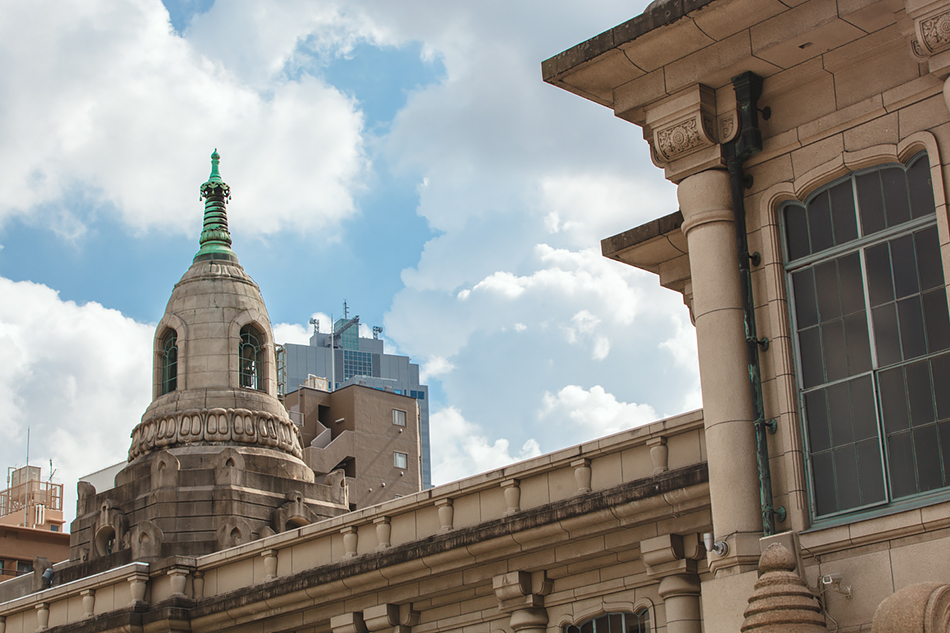 Tsukiji Hongan-ji’s predecessor was the temple of Edo-Asakusa Gobo, built in 1617. The temple burned during a citywide fire in 1657 and the present Tsukiji Hongan-ji was built between 1931 and 1934. It’s noted for its unique architecture, influenced by temples in South Asia. 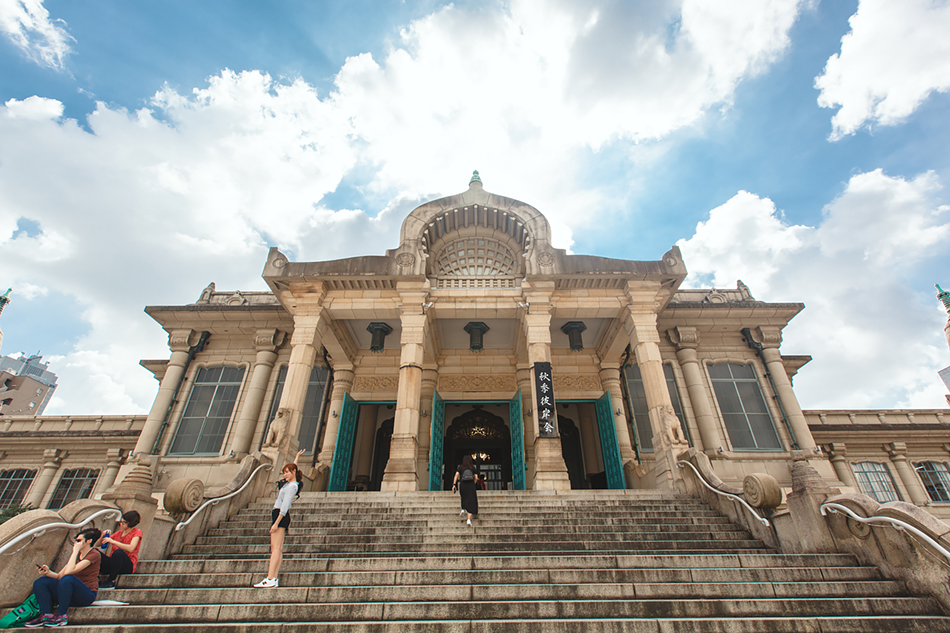 One of the entrances to the Tsukiji market- the biggest wholesale fish and seafood market in the world. 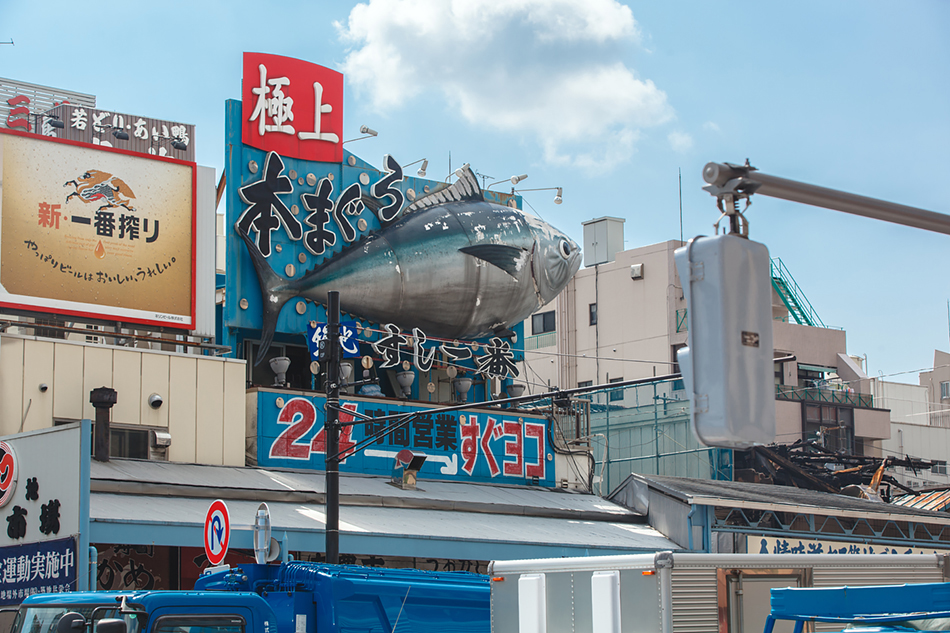 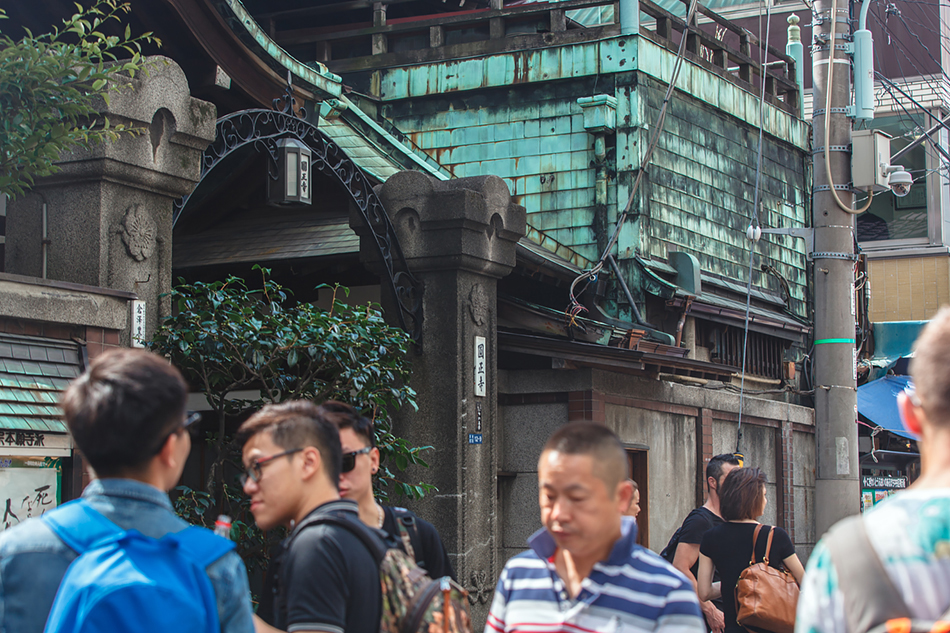 Namiyoke Inari shrine is a Shinto shrine located in the Tsukiji market. 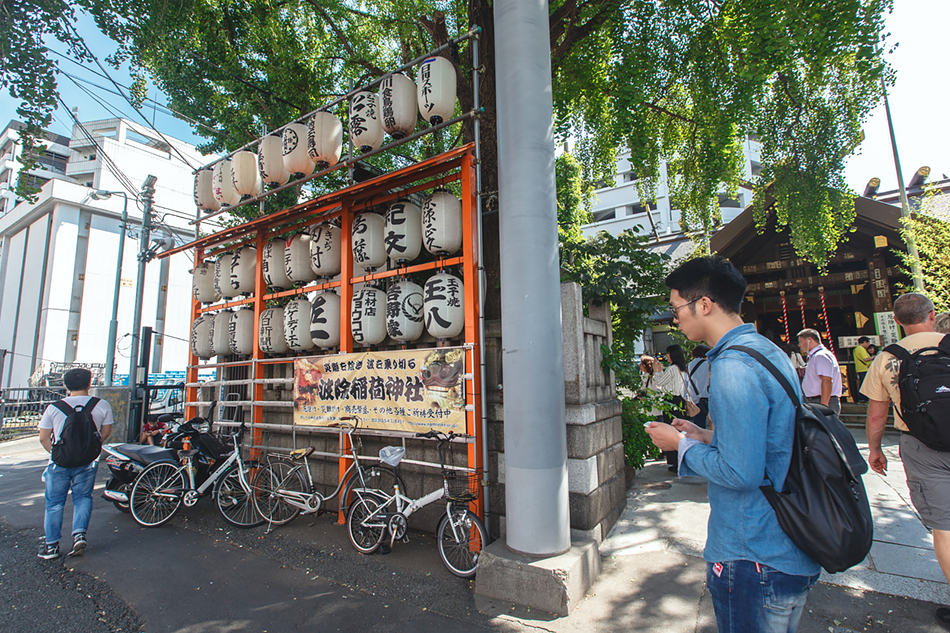 It is an Inari shrine that was built on the water’s edge when this part of Tokyo was created from landfill after the Great Fire of Meireki in 1657. The name of the shrine literally means “protection from waves.” 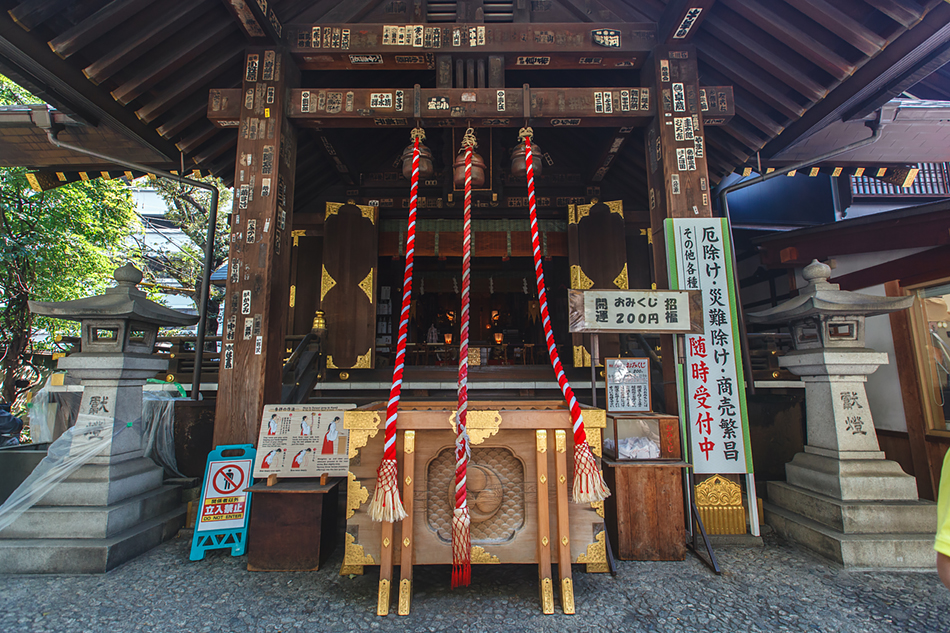 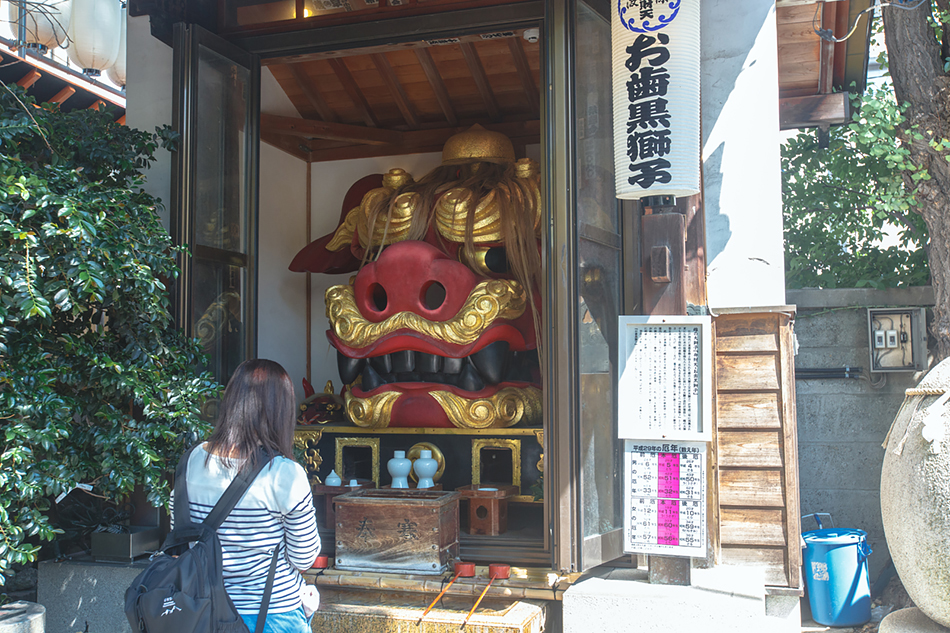 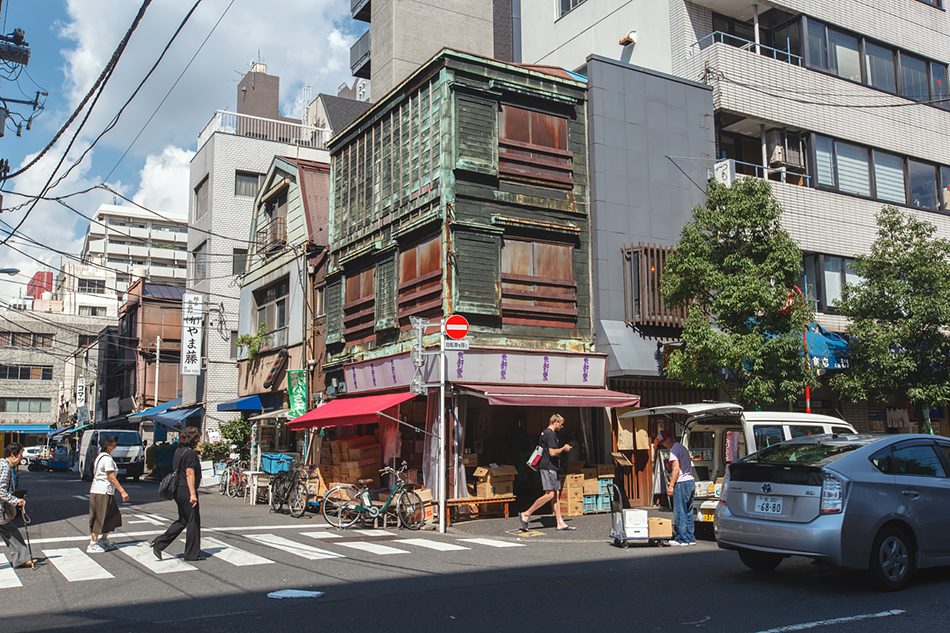 The first fish market in Tokyo was established by Tokugawa Ieyasu during the Edo period to provide food for Edo castle. Tokugawa Ieyasu invited fishermen from Tsukuda, Osaka to Edo to provide fish for the castle. Fish not bought by the castle was sold near the Nihonbashi bridge, at a market called uogashi (literally, “fish quay”) which was one of many specialized wholesale markets that lined the canals of Edo (as Tokyo was known until the 1870s). 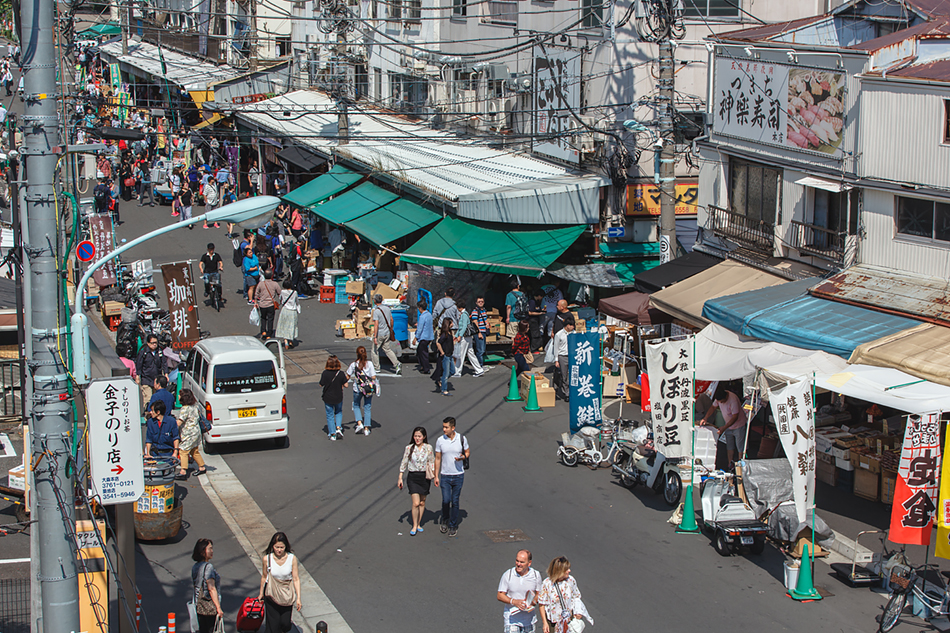 On August 2017, a fire broke out in some of the market’s outer buildings. 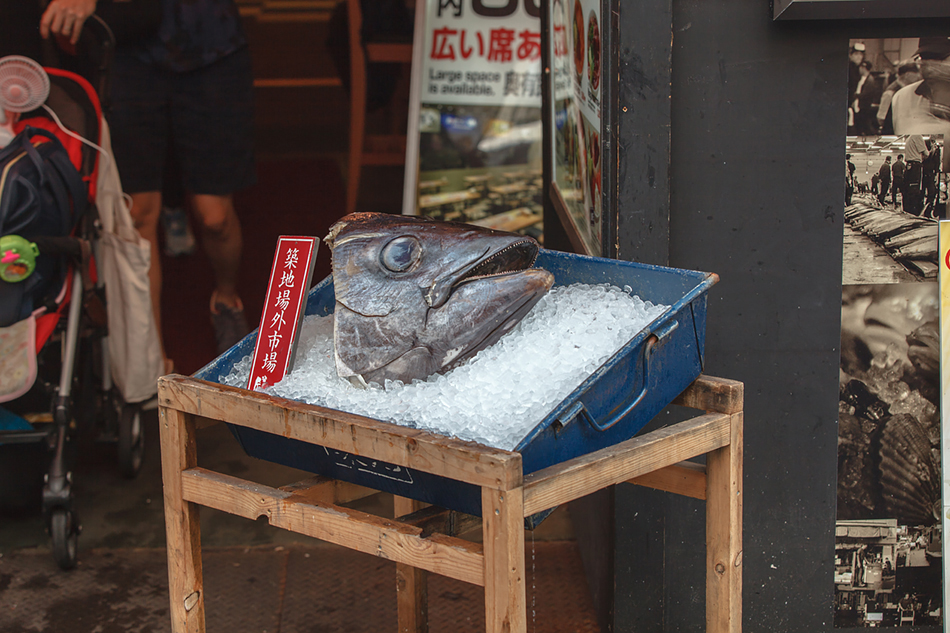 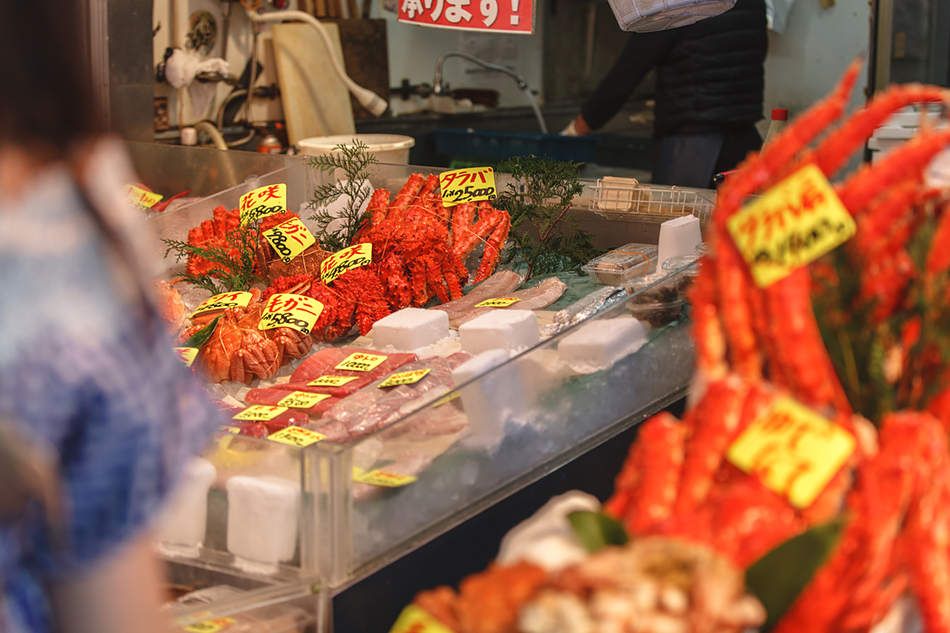 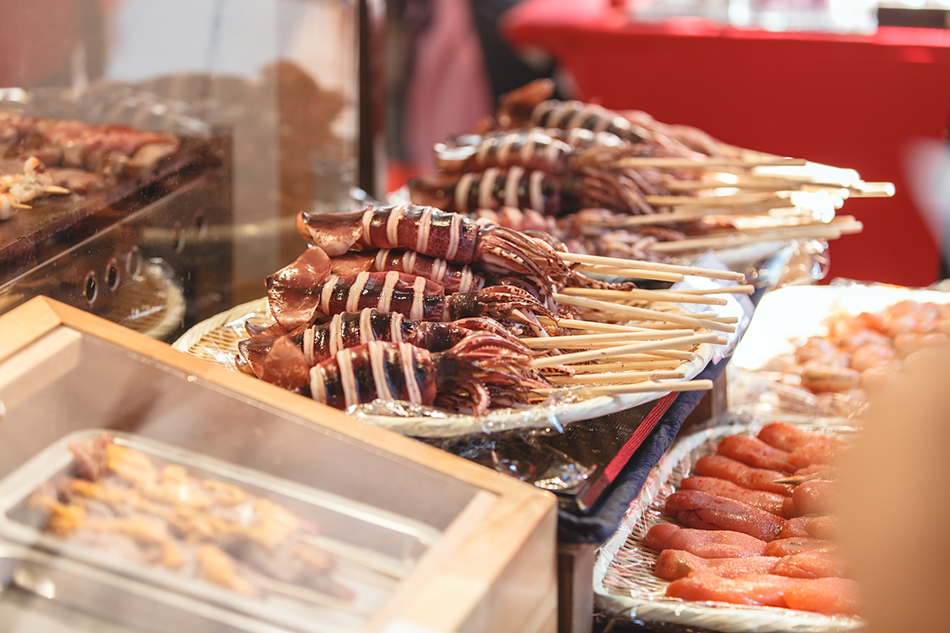 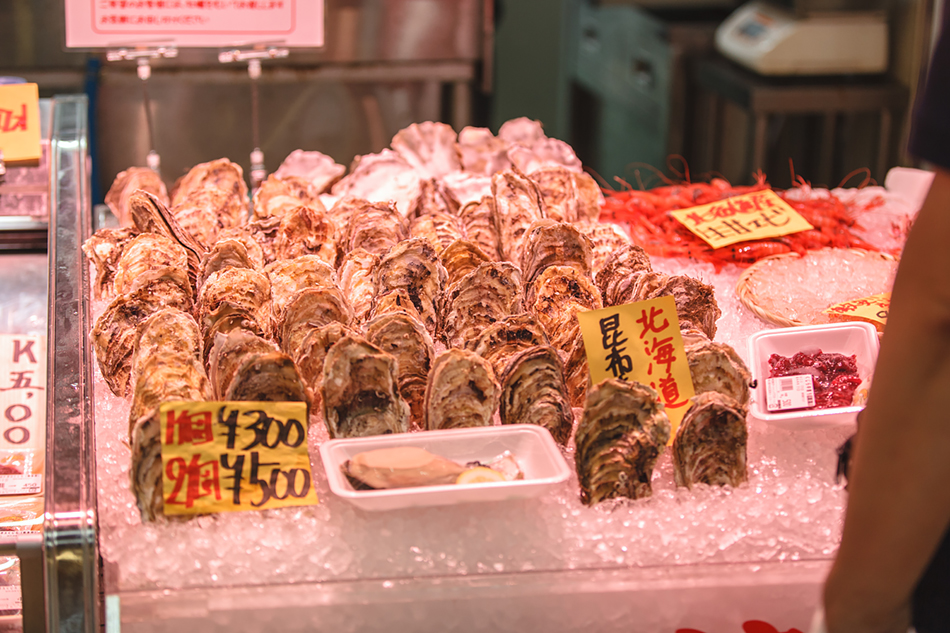 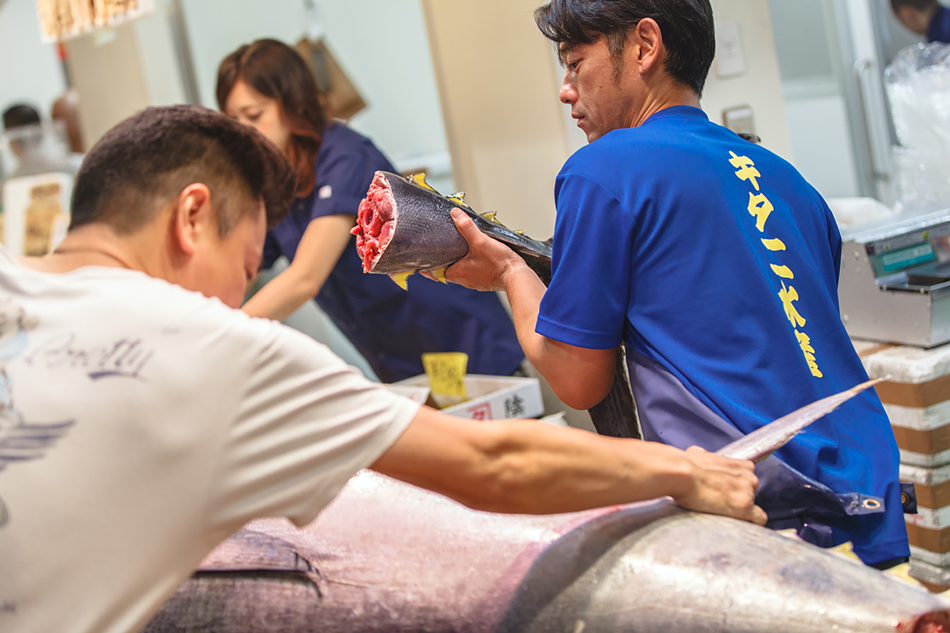 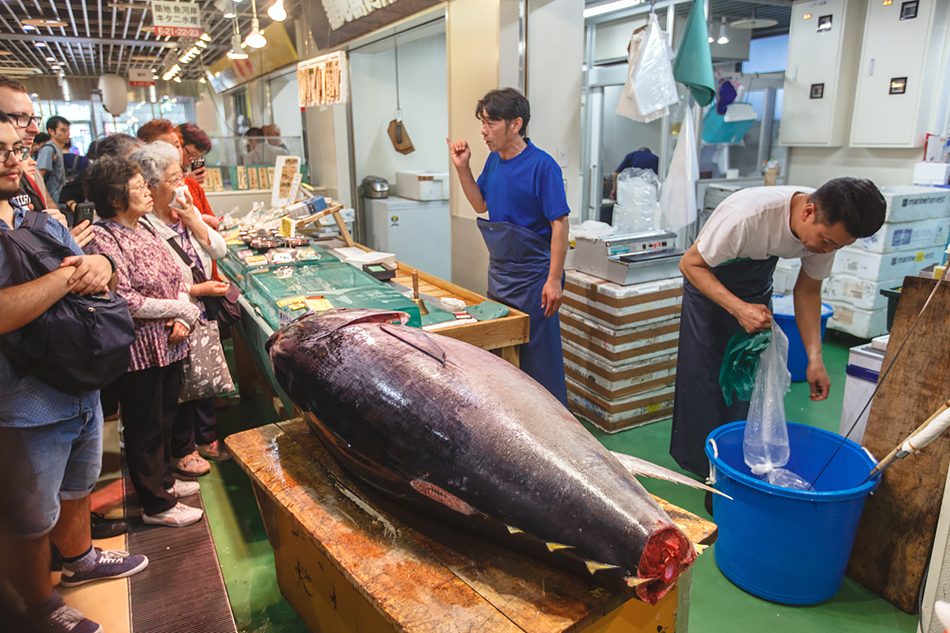 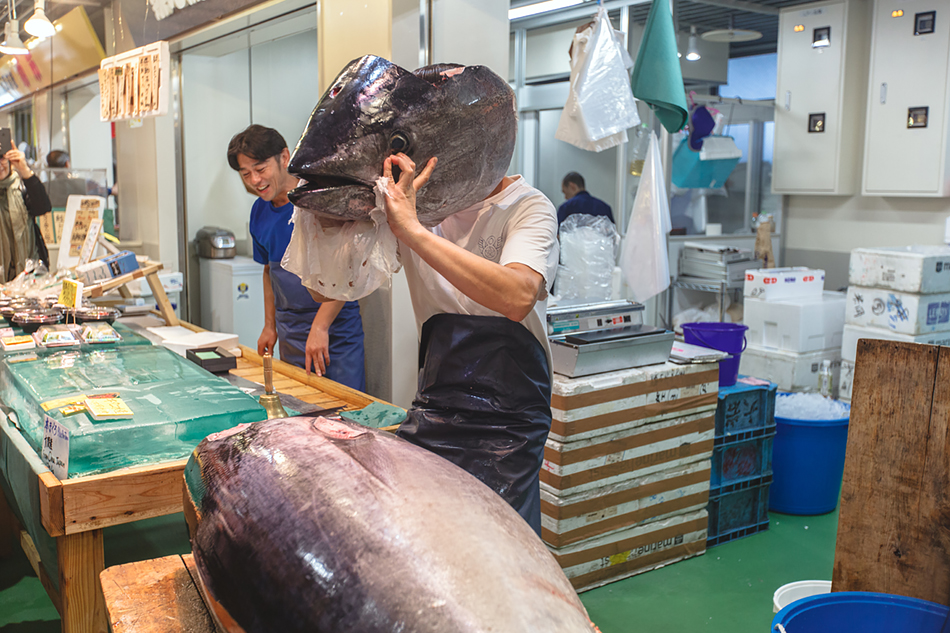 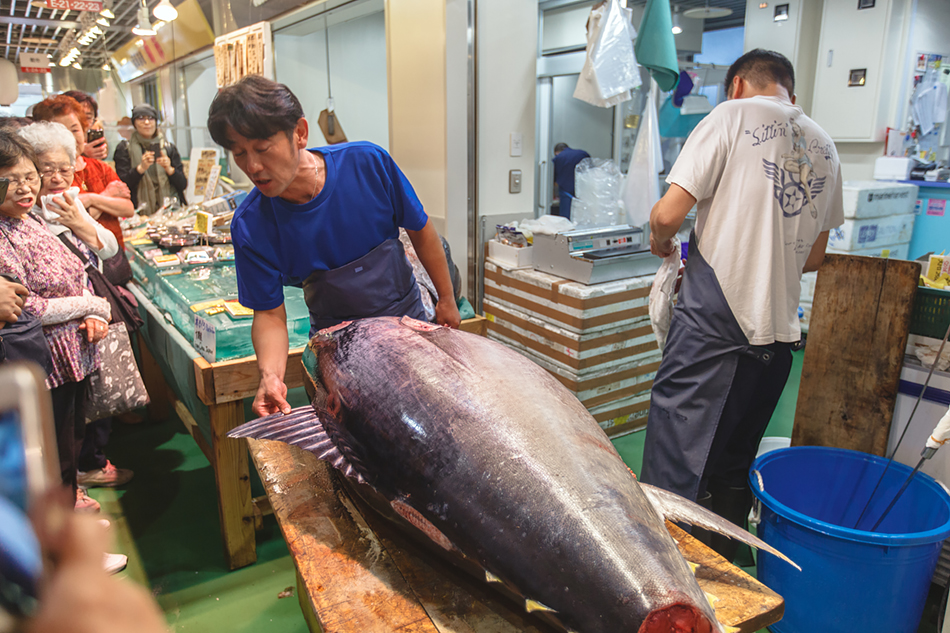 A maguro bocho is an extremely long, highly specialized knife used to fillet tuna and other large fish. 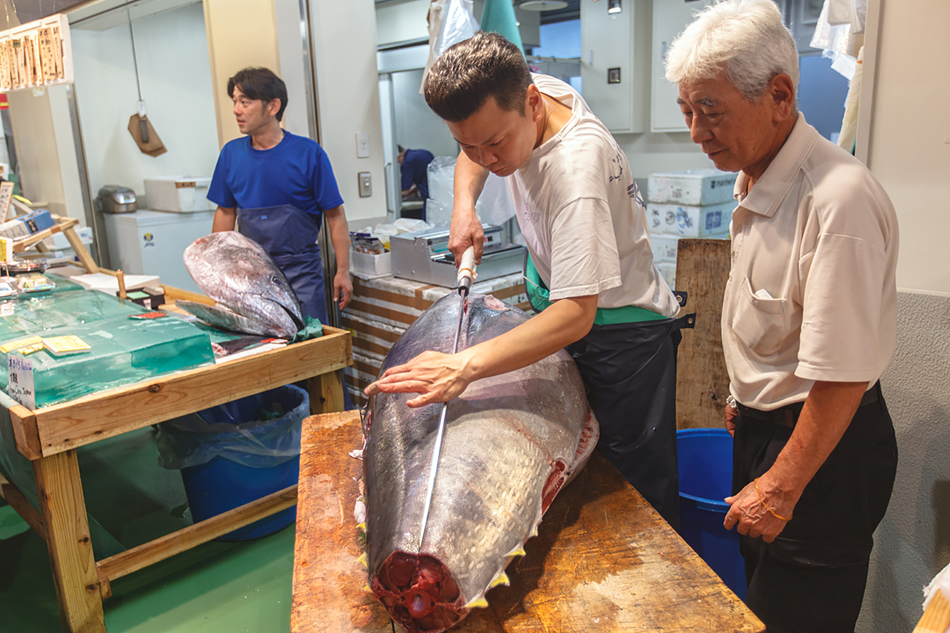 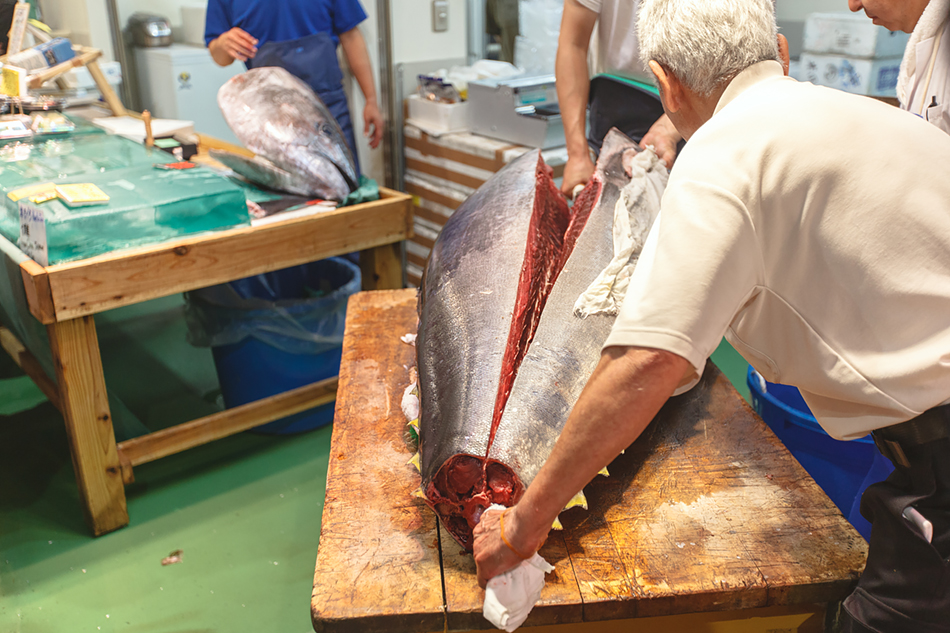 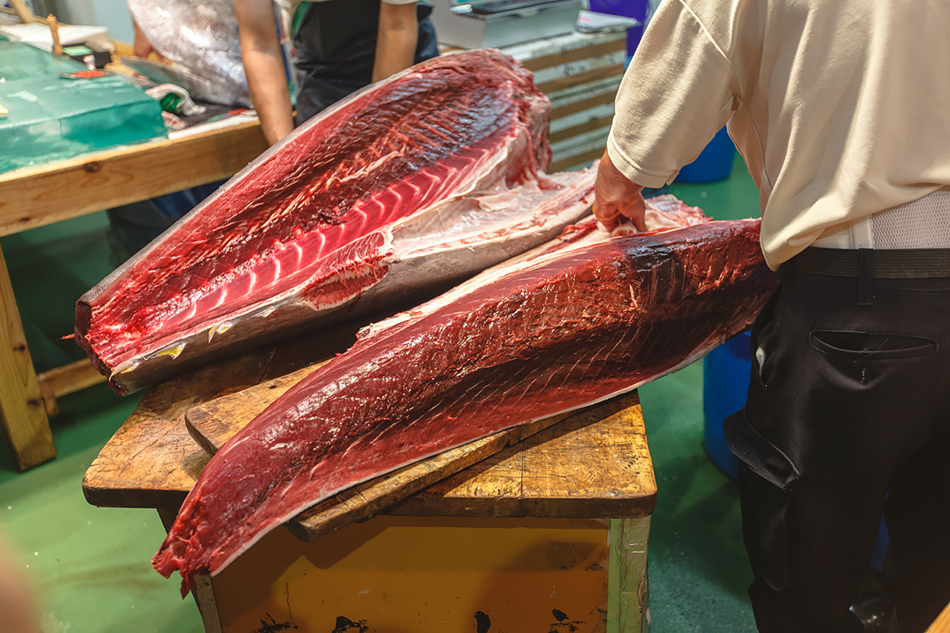 The maguro bocho is a long knife with a blade length of 40cm to 150cm in addition to a long handle. 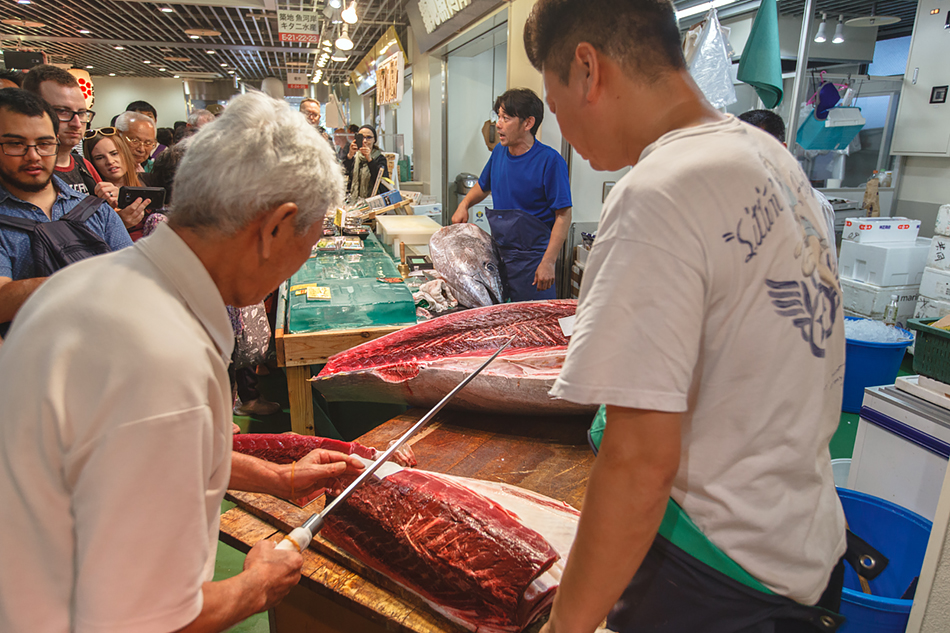 Often they are used by two people simultaneously, where the second person handles the other end, using a towel wrapped around the blade for protection. 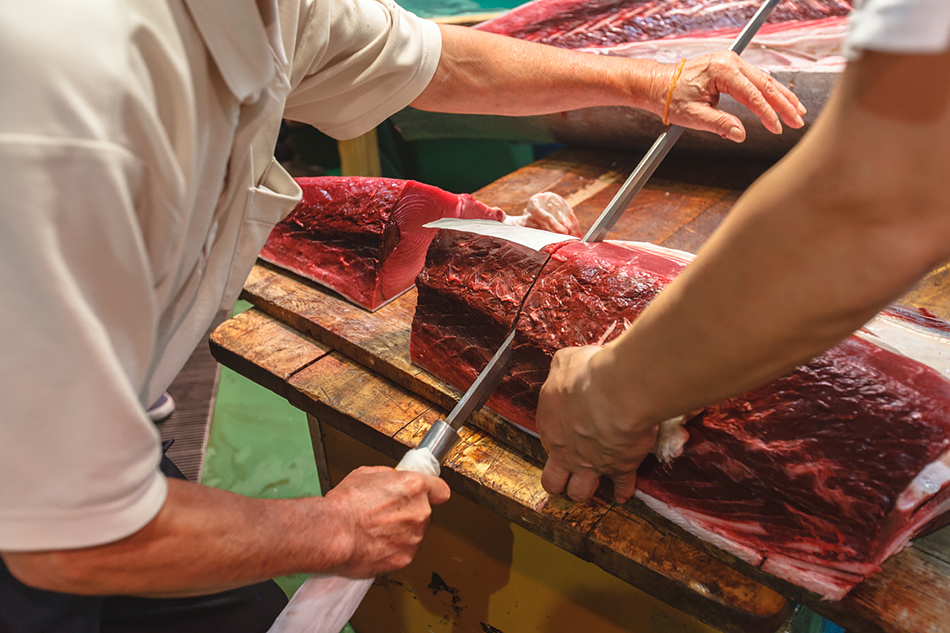 The maguro bocho are not designed for use as weapons, but as tools, although they have been used as weapons by Yakuza. 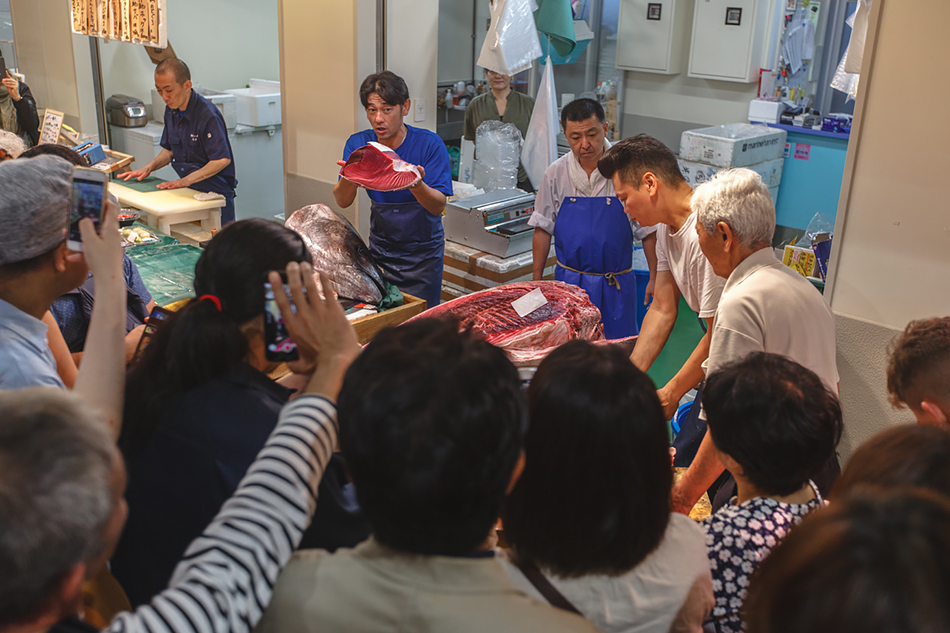 Sumida river behind the fish market. 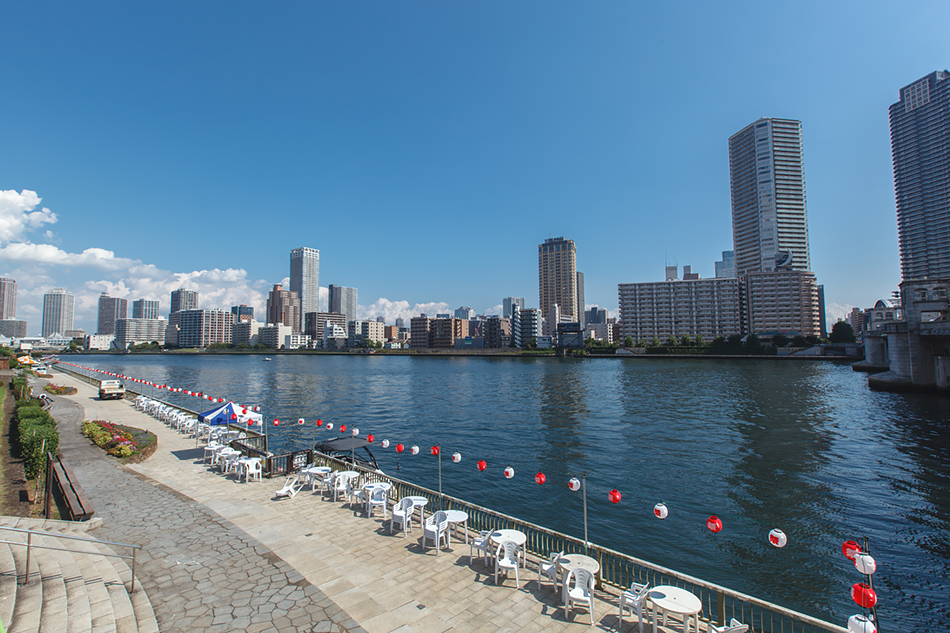